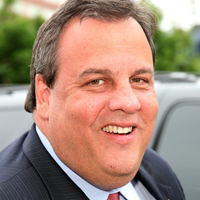 The Los Angeles bariatric surgeons at La Peer explain why the NJ Governor might have chosen the wrong surgical weight-loss (bariatric) procedure.

According to a story in the New York Post last week, New Jersey Governor Chris Christie recently elected to undergo gastric band surgery also knows as Lap Band surgery. In the case of many patients, the governor opted for weight loss surgery to address health issues related to his weight. While Governor Christie is not the typical celebrity or sports figure, you see in the media regarding a surgical procedure – his choice to undergo gastric banding brings bariatric surgery back to the spotlight. It raises several questions regarding the safety and effectiveness of the procedure.

“85 percent of patients are women, but there is a similar degree of obesity in men,” said Dr. Amir Mehran, Bariatric Surgeon and Medical Director of La Peer’s Bariatric Surgery Center of Excellence. “This announcement may break the taboo of men having bariatric surgery, especially since they have a higher rate of abdominal fat and cardiac disease compared to women.”

Before surgery, Chris Christie weighed about 350 lbs. Although the governor was a prime candidate for bariatric surgery and made a wise choice from a health standpoint, questions as to whether the band procedure was the best choice arise.

“The theory behind the gastric band or Lap Band is that as it tightens you will want to consume less food and feel full quicker,” said Dr. Samuel Kashani, a bariatric surgeon at La Peer.

How Does the Gastric Band Work?

Gastric-band surgery is usually performed laparoscopically, with surgeons cinching an adjustable silicone band around the patient’s stomach, limiting the amount of space for food. Adding saline to the band makes it tighter. In the first and subsequent years after surgery, patients typically visit their physician six or so times to have the band adjusted. The tighter the band, the less food a person wants to eat. This involves insertion of a needle thru the abdominal wall and putting fluid in or taking fluid out, depending on the patient’s weight loss trends or symptoms such as obstruction.

“Most times patients are told that the gastric or Lap band procedure is the least invasive and has the shortest downtime,” Dr. Mehran said, “however patients might not know the complete picture when it comes to the band procedure. In almost all cases, far better options do exist.”

What patients often do not know is that, despite an initially faster recovery time, there is a higher reoperation and complication rate down the road. Additionally, the procedure requires that the gastric band be adjusted frequently through needle injections. Although the band is reversible, it comes with complications such as scarring and the need for subsequent surgeries, which Gov. Christie could potentially face. Most importantly, super morbidly obese patients, such as the governor, with a BMI over 50, historically do not fair well after the band procedure. Dr. Mehran and other experts believe that stapled procedures like gastric bypass, duodenal switch or even the sleeve gastrectomy are better options for morbidly obese patients.

Patient education and care are essential when deciding whether to undergo a bariatric procedure. The Bariatric Surgery Center of Excellence, a subsidiary of La Peer Health Systems, stresses the importance of explaining all options to weight loss patients. As highly trained surgeons, they can discuss the pros and cons of every procedure available in order to guide patients to the best possible treatment option. The doctors at the Bariatric Surgery Center of Excellence also believe in discussing non-surgical options as well, if they can achieve the same desired results.

To learn more about the Bariatric Surgery Center of Excellence, contact us today at (888) 391-0182 or fill out our online contact form.

ORBERA Intragastric Balloon System
The ORBERA™ Intragastric Balloon is made to help you lose weight. ORBERA™ is a balloon made of soft, smooth silicone rubber. The empty balloon is...
STUDY: ‘Obesity Gene’ May Contribute to Weight Gain
A gene linked to obesity risk can actually cause people to gain weight, according to a study published in the Journal of Clinical Investigation. The...
Read More →
Sitemap | Design Development by Goldman Marketing Group
The information available on this web site is provided for informational purposes only. This information is not intended to replace a medical consultation where a physician’s judgment may advise you about specific disorders, conditions, and/or treatment options. We hope the information will be useful for you to become more educated about your health care decisions. Always seek the advice of your physician or other qualified health provider with any questions you may have regarding a medical condition.

DISCLAIMER: Content on this website is not intended to serve as medical advice and should not be construed as such. Please see a medical professional in order to obtain specific advice for your medical conditions.